While watching the Rose Bowl every year on TV back in Transcona, I used to look out the window at all the swirling snow, which seemed never-ending.
I remember envying all those folks sitting in the stands wearing shorts and short sleeve shirts, and then I would start chanting to myself, “Someday, Man, someday.”

Eventually, I got so busy cutting records with the Jury before starting my radio career I didn’t think about it much anymore.
Then one day, it came thundering back when I woke up with the chant, “Someday, Man, someday,” pounding in my head, and I knew that if I didn’t go to California right now, I never would. (A wee bit of the mid-life crazies may have also been involved.)

Anyway, after almost ten years with Fairbanks Broadcasting in Indianapolis, I packed my bag and headed for California, leaving family and friends behind. Luckily, my first client was KOGO/KPRI in San Diego, which was owned by the Shadek Family.
KOGO was doing a new format that Jack McCoy had created called “The Radio Magazine,” and KPRI was an AOR radio station.
(San Diego, pictured above)

I loved living in San Diego, and I loved working on the magazine format, but unfortunately, it was very time-consuming, and unbeknownst to me, I was soon going to be all out of time.
I still think the Radio Magazine concept is still a good one, but as I said, it’s time-consuming, and radio doesn’t have those kinds of chops anymore. Besides their San Diego properties, the Shadeks also owned an FM in San Antonio.
They’d tried several kinds of formats on it, but nothing had gotten any traction, so they were hoping that I could duplicate KVIL’s success.
(The Riverwalk pictured above)

Doing KLLS in San Antonio was a great opportunity to show some potential clients that even though KVIL was unique, I believed it was a concept that could be done anywhere.
We’d already proved in Palm Beach with WRMF that it would work without the great Ron Chapman, but would it work outside of Fairbanks Broadcasting? That was the question.

While working on KVIL and WRMF, I was often asked if I could pinpoint what it was that made those two stations so special. I would respond with, “They did everything with Class.”
So, of course, the new name of the new format had to be “Class.”

Not only was Class/Classy a great descriptive name, but philosophically, it kinda told the stations what to do and what not to do. Hey, does it fit in the class box or not?

A few of the folks down the road who “got it” and did an excellent job running with it were Steve Dinkel at KLSI in Kansas City, Dana Horner, and Chris Mays at KLSY in Seattle, along with Chris Kampmier and Bob Glasco at KLZI in Phoenix.
Not only did their radio stations sound great, but their marketing was also superb. Hey, but I’m getting a little ahead of myself here.

When we launched “Class FM” (KLLS) in San Antonio, just like in Dallas and Palm Beach, we built it on the air piece by piece.
The only difference between KVIL, WRMF, and KLLS was; KVIL took two years to get the money, WRMF one year, and KLLS six months.

The GM, Jack Collins, was another character who more than fit into the scheme of things.
Jack brilliantly had Arbitron do a zip code run which showed that KLLS was already #1 in the northern half of San Antonio.

Next, he printed up a map with a line drawn through the center of the city and a slug line in the northern part that read, “KLLS IS #1 RIGHT HERE!
Then he sent the map to all the advertising agencies, which resulted in our getting all the money.

Oh, the north part of San Antonio happened not only to be where all the Malls were but also where the upper middle class and the affluent lived. (See the zip code run below) Now all I needed was somebody to spread the word about the success of Class FM and be able to tie it together with KVIL and WRMF. There was only one guy who I knew could do that, and his name was Jim West.
Jim ran a company out of Dallas called Fairwest that syndicated Music Of Your Life and Continuous Country, so the “Class” format was a perfect fit for him, so off into the future we went.
(Jim West pictured above) Bam! And just like that, I was all out of time. Jim had gotten so many clients so quickly that I couldn’t possibly keep up and desperately needed some help.
The perfect answer was my brother Reg who was a successful programmer at CKRC in Winnipeg, CKGM in Montreal, CFTR in Toronto, WVBF in Boston, and Fairwest Programming in Dallas.
(Reg and me pictured above)

When we combined forces, we also opened an office that overlooked La Jolla cove.
(La Jolla Cove is pictured below) 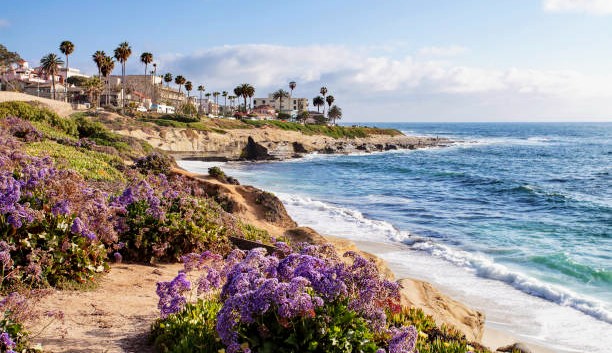 While taking the “Class” concept nationwide, the only thing we did a little bit differently was turn up the heat with more talk-causing promotions and some stunting.
The result was we blew out a few phone systems, which we did so that we could get the TV news people to talk about us.

Oh, and somewhere along the line, we also figured out how the stations could make a few bucks with some of our promotions without hurting programming.
Doing some of these promotions with a sales twist eventually led Reg in a new direction and a new career.

The only problem we had with “Class” was it just grew too damn fast.
We began creating road crews whose job it was to teach and find us more characters.

We even tried bringing the clients to us when we did regional seminars in San Diego on a huge ocean-going yacht in Dallas at Texas Stadium, at JR’s ranch, in Nashville on the stage of the Grand Opry, and in the Mountains of Utah, it was still unmanageable.

Not only were we getting stressed out by just trying to keep up, but Reg and I were on the road nonstop, which was burning us out.
Hey, I agree that every market is somewhat unique, but Hotels, Restaurants, Bars, and  Airplanes ain’t.

I, for one, was not only growing tired of the travel, but I was also growing weary of explaining to the sales folks over and over again that doing a remote from a tire store wasn’t at all classy.
However, I still loved coaching the air talent, so that’s where I started to spend my time, and Reg began to get much more involved in the promotion side.

In the beginning, Reg and I had set out to build a very solid consulting company, but we were now starting to realize that it’s impossible to do hands-on radio when you’ve got forty of ’em.
Trouble was beginning to brew, but unfortunately, it was cleverly disguised as opportunity.

Unfortunately, we’d never spent any time preparing for our success, so as we were approaching our fortieth market, instead of celebrating, we needed to figure out how to make the format more philosophical.
As I said, we could no longer do the hands-on approach because we were out of time.

However, chaotic and stressful as things were, not only did manage to buy a syndication company, but we also became owners of several radio stations, but that’s another story for another time.

Radio Geo’s Media Blog is a politically incorrect inside look at Radio, TV, Music, Movies, Books, Social Media, Politics, and Life, primarily written with men in mind.
For a sneak peek at some upcoming Blogs or to see some that you may have missed, go to GeorgeJohns.com. On Twitter @GeoOfTheRadio. Sharing and/or commenting is appreciated.
If you’d like to subscribe to Radio Geo’s Media Blog, simply send your name and email address to radiogeo@gmail.com.