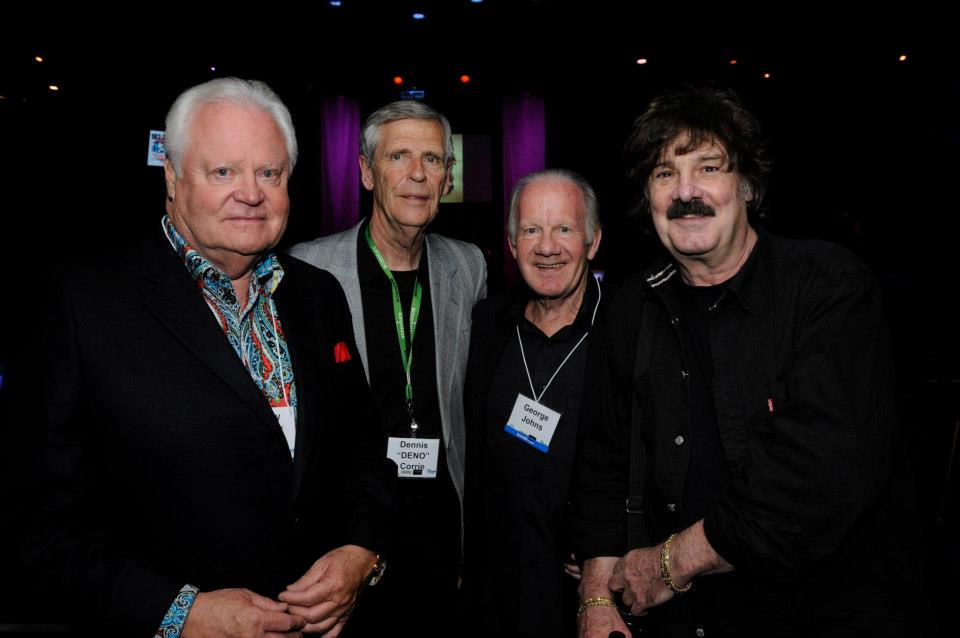 I just realized the other day why I hardly listen to the radio anymore; it’s lost its character!
What I mean by that is most of the creative characters that used to be on the radio are long gone. For me, the love of characters on the radio began while I was growing up in Winnipeg/Transcona,
I used to listen to CKY, which was filled with guys who didn’t sound like announcers, Jack Wells, PJ the DJ, Deno Corrie, and Mark Parr.
(Cactus Jack is pictured above with TV star Marvin Miller. Mark Parr is pictured below. Deno Corrie is pictured at the CKY reunion with me, Jimmy Darin, and Burton Cummings on top.) Later on, when I became a radio man, I started as a board op at CKY in Winnipeg, where they’d added even more fun guys like Jimmy Darin, Chuck Dann, and Daryl ‘B’.
(Daryl ‘B’ is pictured below) I was raised on radio characters, so when I got a shot at becoming a PD in Saskatoon, I couldn’t imagine doing it without some off-the-wall young guys like Gary Russell, Ken Sebastian Singer, Doc Harris, Woody Cooper, and Alfie. (All of whom went on to become radio legends.)
(Gary Russell and me, right below.) While in Saskatoon, I realized that if I wanted my radio work to be noticed, I’d have to do it in eastern Canada, so I took the PD’s job in Sudbury.
Luckily Michael Cranston was already there, and not only did he sound good, but he also sounded bigger than the market.

Needing more talent, though, I got to bring in my guys, Gary, Doc, and Woody from Saskatoon. (My first road crew)
(Doc pictured below) In Ottawa, Ken “The General” Grant was already a big deal, so when I surrounded him with smooth-sounding guys like Joel Thompson, Shelley Emmond, and Roger Klein. Their warm, smooth delivery made him stand out on the radio just a little bit more.

In Toronto, my main character was the “Magic Christian,” whose board op you may have heard of, Rick Moranis.
Magic and Rick were preceded by the silky smooth sounds of Sandy Hoyt and “the voice,” Earl Mann.

I don’t know how or why, but at some point, I discovered that when you put smooth guys like Larry Dixon and Jack Schell of Dallas around all the characters, it makes them sound a little more bizarre. (Pictured above is Earl Mann, on the left Bob McAdory, and Magic)

When I moved to America to work for Jim Hilliard, I lucked out because he was even more into characters than I was.
By now, though, I was also searching for the “gifted” type of characters; those were the ones that got my full attention. In Indianapolis, what was so unique to me about Cris Conner was his ability to observe life and then make some very clever (gifted) comments about what he had seen.
(Cris and Adam Smasher pictured above) Buster Bodine not only sounded just like his name, but he also had a lot of great local content, which he would perform by using a kinda Cajun boogie rap.
Adam Smasher was just a singer in a rock and roll band which gave him a naturally raspy voice, so when we put him on the radio, he jumped out right at you.
(Buster shown above) Down the hall on our AM, Chuck Riley not only had one of the best voices ever heard on the radio, but he also had an infectious laugh that made you laugh along with him.
One day when he asked me what I thought he should do to get even bigger ratings, I, of course, said, “laugh more.”
(Riley pictured above) Riley must have taken my advice because before long, Mr. Fairbanks hauled me into his office to ask, “George, can you explain to me what the hell Chuck Riley is laughing about all the time?”
Orly Knutson was our mid-day guy, and he had so much magic in his voice that I believe he was involved with most of the female staff members. A bunch of us marveled that he could still walk.
(Mr. Fairbanks is pictured above, and Orly below) In Boston, Charlie Kendall, like Buster Bodine in Indy, also had a boogie-type delivery which was different from Buster’s and a lot more southern.
There’s no doubt that Charlie stood out in Beantown as only a Redneck would. Then, of course, there was Austin in Boston, who had a great voice and a smooth delivery, but it was his content that was outrageous and that scared management to death.
Austin had the whole town talking, though, and that added a hundred thousand folks to our cume in less than six months.
Unfortunately, Austin was so hot that eventually, he flamed out and was replaced by Loren and Wally.
(Austin shown above, Loren and Wally below) Loren and Wally couldn’t have sounded any more different than Austin or each other.
Loren was the big voice guy who prepared everything, and Wally was Boston’s biggest sports fan. Other than that, Wally kinda just hung out.
Luckily, Wally found Loren very amusing, and Loren just loved making him laugh. Wally, like Chuck Riley in Indy, also had an infectious laugh, so you couldn’t help but chuckle along.
In Boston, Loren & Wally had their own kind of magic, and it lasted for decades. Delilah was so un-radio that she not only sounded unique, but she sounded extremely special. At the time, though, we had no idea that she’d go nationwide.
She, like Ellen K in LA, has something in her voice that makes women love her.
(Delilah, pictured above) In Dallas, the great Ron Chapman’s gift was his sensitivity to humor, and his ability to find humor in most things which made his show very funny, even though Ron never told a joke.
If you wanted to be a stand-up comedian, you needed Ron in the front row because he’d be on the floor howling halfway through your first joke.
(Ron and me pictured above at his induction into the Radio Hall of Fame) Bill Gardner, who won personality of the year when we were working together in Dallas, was one of those rare characters who can take a whole paragraph and pare it down to seven words.
Not only would his words be local, but they would also make you laugh out loud.
(Bill shown above) Mike Selden was another Boogie Maniac, and Cat Simon, who followed him, was even more outrageous.
(Mike Seldon is pictured above)
I remember when Cat called the Queen, but my favorite call was when he talked to the guard outside Paul McCartney’s jail cell when Paul was busted for Marijuana.
Cat was trying to get the guard to ask Paul if he could fill in for him with The Beatles while he was incarcerated. (The Guard only spoke Japanese) Oh, and lest I forget, Major Tom Lewis’s content on his nighttime show was so bizarre that Ron Chapman would play back some of the stuff he found on the tape machine the next morning.
Ron would ask the folks if they knew what any of this was about. They did!
(Major Tom, Jack Schell, and Larry Dixon are shown above, Chuck Knapp is below) In Philly, it was Crazy Bob McClain, who did a show much like Dr. Don Rose and Jimmy Darin with whistles and sound effects.
Chuck Knapp, who was also there, sounded so hip that you just knew that there had to be some weed involved. In West Palm Beach, Dandy Don Wright sounded so happy that even though you didn’t know what he was happy about, you had to have some.
(Dandy Don, shown above, and Kevin Kitchens and his long-time partner Jennifer Ross are pictured below) Kevin Kitchens was very local and used his unique style of delivery to become a South Florida radio legend.
Ken LeMann, our mid-day guy, like Gardner in Dallas, also had a warm delivery with content that was as equally outstanding. When we hired a guy out of Dallas for West Palm Beach called Dancin’ Dave, by the time he arrived, we had already changed his name to Buzz Barnett.
When he heard his new name, he hit the air sounding like a hummingbird on crack.
(Buzzy above, Jo Myers below) Oh, and then there’s one of my all-time favorites, Jo Myers.
All you had to do was ask Jo what she did last night, and you had a whole morning show. In Portland, it was Craig Walker, who, like Jim Harper in Detroit, was so warm and friendly that you just wanted to hang out with him and be his friend.
(Craig Walker pictured above, Jim Harper below) In Greensboro, Bill Flynn not only had a magic quality in his voice, but he was also a magician.
Bill loved doing his magic tricks at all the station events, which in my book, made him a double threat. In Sonoma County, where I must admit I’ve had more than my fair share of wine, Brent Farris is so local sounding that unless you live there, you don’t know what the hell he’s talking about.
Whatever he was talking about, though, was good enough to get him into the San Francisco Radio Hall of Fame.
Speaking of San Francisco, when I was working with Don Bleu, he simply jumped out of the radio and grabbed you by the ears.
(Brent Farris is shown above, Martin Milner below) In San Diego, I hired movie star, Martin Milner, to do mornings on a new format I was working on called “The Radio Magazine.”
Talk about standing out, Marty was not only a great human being, but he also had all the agency ladies up in LA throwing money at him, trying to get his attention. A few years later, when Jeff and Jer came to town, I had recently become a radio consultant, so I got to work with them.
Part of their magic came from the fact that they didn’t hang out together, so they were genuinely glad to see each other and catch up.
Jeff was a homebody with kids and stuff, but Jerry, who was newly married to his former PD, Pam Cesak, liked to hang out with the stars at night.
Jerry tried to keep his personal life private, so he didn’t want to talk about it on the radio which made Jeff try even harder to get Jer to disclose where he had been last night and just who he was with.
Eventually, Jerry would give in and use his Hall of Fame storytelling ability to fill us in and blow us away.
(Jeff & Jer pictured above.)
As I said at the beginning of this not-so-short story, I did and still do love listening to characters on the radio.
Luckily, I got to work with some of the best, and the part I like the best is almost all of them are in the Radio Hall of Fame.
It was my needing to put characters on the radio that led me to rethink my programming direction.
The word “different” soon became a big part of my radio career, but I’ll get into that in “Character Part II.”
Radio Geo’s Media Blog is a politically incorrect inside look at Radio, TV, Music, Movies, Books, Social Media, Politics, and Life, primarily written with men in mind.
For a sneak peek at some upcoming Blogs or to see some that you may have missed, go to GeorgeJohns.com. On Twitter @GeoOfTheRadio. Sharing and/or commenting is appreciated. If you’d like to subscribe to Radio Geo’s Media Blog, simply send your name and email address to radiogeo@gmail.com.