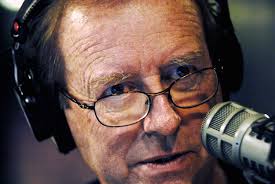 Last week I wrote about always wanting to own my own radio station. Hey, if they won’t give you a piece of the rock, you get your own rock right?
Eventually, my brother Reg and I, along with our CFO, Bill Yde, raised some money and purchased a brand new facility in Portland Oregon, KKCW, (K-103)
Shortly before getting our license to operate K-103, I flew into Portland to check out all the other radio stations.
After dialing around a little, when I got to the #1 radio station, I discovered that they had a morning man that I just had to have.
His name was Craig Walker (pictured above) and he reminded me a lot of Ron Chapman at KVIL in Dallas.
Not only was Craig warm and smooth, but I could tell he loved Portland and Portland loved him, especially the ladies.
When I got to meet Craig, I liked him a lot but I also realized that it wasn’t going to be easy. Not only did he have a non compete for a whole year, but if you looked up the word expensive in the dictionary, you’d see the picture that I posted on top.
I handled the expensive part by mortgaging my Coronado home to guarantee his salary. (Craig claims that he still has the napkin I wrote the offer on)
Having to wait a year would have been a deal-breaker for most, but it was perfect for us because we planned on doing the same thing K103 that we did in Dallas, Palm Beach, and San Antonio.
The concept was code-named, “Build Your Own Radio Station” which had all started in Dallas while waiting for them to merge the Dallas and Fort Worth rating books before doing a full-blown launch.
It worked so well in Dallas that even though we didn’t have to, we did it again on WRMF in Palm Beach and on Class FM in Sab Antonio.
Even though we were just being cute, we really needed to stall in Portland and we needed to do it for a whole year.
The way it worked was, we’d start running on-air promos saying that we had just been granted a license by the FCC to begin broadcasting on 101.3 on the FM band. The promo then went on to say that we were required by law to serve the people of Portland and the best way to do that was by turning the radio station over to them.
101.3 was now their radio station and we were standing to hear what they wanted us to do with it.
Every Monday morning, we would launch something new using their phone calls telling us to do it. All we had to do now was stretch it out for a whole year before launching Craig.
Even though we didn’t have him yet, I had a piece of paper that said I eventually would so I let it slip out, why keep it a secret right?
Eventually, a newspaper reporter took the bait and came-a-calling.
She started the interview by asking me about our plans for the station but when she finally asked about Craig Walker was joining us, she added that she had checked it out with KGW and they said, absolutely not!
I replied by asking her if she’d ever listened to Craig, and when she said that she listened to him every morning, I just said, “Can you imagine how good he’s going to sound in stereo on K103?
As the year crept by, we kept adding things to the air and tried to keep the controversy of Craig alive.
Craig, because of his contract, never said a word about any of this although the lady reporter did mention to me that the last time she asked him about it, he did have a mischievous smile on his face.
Then suddenly, with about six months to go, KGW pulls Craig off the air.
I guess they were hoping that the folks would forget about him, but what they failed to remember was that Craig was on TV every afternoon as the host of PM Magazine.
When Craig finally hit the air on K-103, the folks were so hungry to hear him that K-103 went #1 his first morning on the air.
Oh and KGW? Well, they went from first to worst and the rest, as they say, is history.
Enjoy your retirement Super Star and thanks for the ride.
GEO’S LIFE-LINERS
Diplomacy doesn’t always work, just ask the folks who had to deal with Attila The Hun, Genghis Khan, Hitler, Mussolini, Himmler, Hirohito, Stalin, Castro, Idi Amin, Pol Pot, Ghadafi. Sadam Hussein and Osama Bin Ladin.
Few people notice you doing the right thing but everybody sees you do wrong.

Wealthy people are all alike, even rich thugs don’t share.

Nobody is more powerful than the middle class, we elect the government and we throw them out.

When Cami was a little girl, my mom scolded me for taking her on so many adventures. She claimed that she’d probably never remember any of it, but I told her, “I don’t care, we’re both enjoying ourselves right now.”

You know you’re starting getting old when people start calling you mister. However, whenever I hear Mr. Johns, I can’t help but look around to see what the hell my father’s doing here.

Why would Trump think that whatever the hell he’s working on is more important than kids being with their parents?

About a year or so ago I had breakfast with Dion and WFTL's Joyce Kaufman at a Diner in South...